« BACK TO PAST EXHIBITIONS 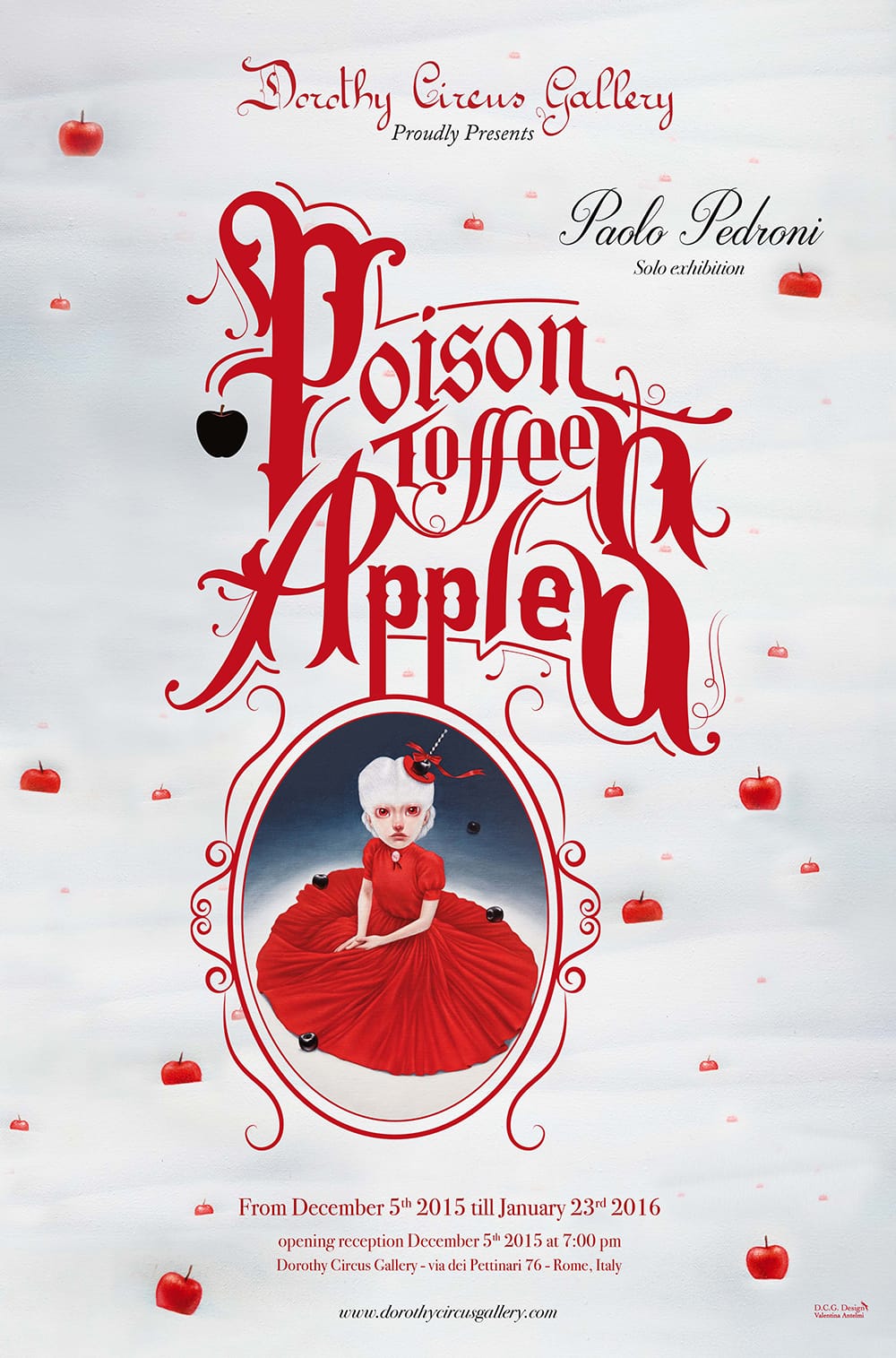 Dorothy Circus Gallery is proud to announce “Poison Toffee Apples,” first solo show dedicated to the Italian artist Paolo Pedroni.
“Poison Toffee Apples” tells through 18 brand new oil paintings and 4 drawings the story of Furry, a child characterized by a peculiar hairy face. The character pictured by Pedroni furthers a tension aimed at pursuing fantastic and bizarre effects, which are typical both of the hyper-contemporary Pop Surrealism and of Mannerist and Baroque painting, which were inspired in turn by outlandish exotic subjects able to raise wonder and marvel in people.
Around the seventeenth century, the interest for particular sciences and for the study of animal and vegetable monstrosity intensified; a similar path was followed by painters, who produced bizarre creations to be inserted in the most important European courts and to give birth to galleries of notorious paintings, in which curious characters were depicted: dwarves, men with two heads or incredibly obese… It is then that, while looking through these antique portraits, we find the first Furry, painted by Lavinia Fontana at the end on the 16th century and embed by Ferdinando II Gonzaga in his collection of “mirabilia”. The artwork shows Antonietta Gonsalus, daughter of Petrus Gonsalus, whose family was affected by a rare pathology called Hypertrichosis universalis, which was also noted by Ulisse Aldrovanti in his “Monstrorum historia,” as well as in the paintings by Lo Spagnoletto and Agostino Carracci.
Furry, the 17th century hairy girl, wears an elegant dress, with a high lace collar and golden buttons and a hairstyle decorated by flowers and little bows… the present Furry, instead, wears a green dress with a high collar embellished by a red ribbon fastened by a teddy bear, and her long hair is done up with a bow. Her wonder-room is a snowy landscape that alludes to loneliness, which is obstructed only by Poison Toffee Apples, quiet companions that witness the sometimes misunderstood contrast between the external poisonous peel and the sweetness of the core.
Through the bittersweet taste of the typical fairy language developed by the artist in his works, the paintings retrace Furry’s life by describing her fragilities as well as her emotional strength. From frame to frame, the protagonist overturns the audience’s expectations by mastering the diversity of her body and showing how insecurity can turn into fortitude.
Through these works, not only the beholder, but the artist, too, undertakes an introspective journey to look for fears and weaknesses as typical of childhood as unique for each of us. In this way, the artist dedicates special attention to that ambiguous femininity or masculinity that often causes discrimination among children.
Pedroni holds Furry’s hand and, step by step, penetrates into her story to walk through all of her insecurities, while tracing the lines of a fable about the acceptance of oneself and of the others, in order to eventually re-emerge as a new and stronger person.
In occasion of the exhibition’s opening, a precious limited edition print set including the images of the 18 artworks belonging to the Poison Toffee Apples collection will be presented. The print set is produced by Dorothy Circus Gallery and will be accompanied by an evoking fabled writing by Jacopo Bosio.
Paolo Pedroni, born in Brescia in 1983, has cultivated his passion for drawing since he was a child. In 2015, he graduated from the European Institute for Design but, even if working in the field of interior design, he never forgot his passion for drawing and painting. In 2011, he was featured in various group shows in Italy, while in 2012 he started his graphic collaboration with Dorothy Circus Gallery for the publication of the three volumes about the story of the gallery. With the discovery of “digital painting,” he started moving his first steps into the Pop Surrealism world and began exhibiting his works in both Italian and international galleries; thanks to his characteristic subjects, Pedroni caught the interest of the Korean brand Junn. J, which hired his for its 2015 collection, presented during Paris Fashion Week at the Palais de Tokyo. While neither forgetting nor denying digital art, in 2014 Pedroni re-discovered oil painting – uncontested protagonist of the exhibition “Poison Toffee Apples.”

“And if you cannot have the life you desire / look at least for this / for as long as it is in you don’t spoil it / until you make an unbearable stranger of it”.

In each fairy tale there is a place and each place finds the one who is brave enough to walk through it.
The school was like those that are built in each time and place: full of statements about what is ‘yes’ and what is ‘no’. It was a horseshoe-shaped building with pastel colours, erected at the top of a hill green in spring and white in autumn. In the spit and polish corridors of the immense building’s twin wings, little legs wearing plus fours and cotton or wool socks – depending on the season – scampered. The little girls were prisoners of the right pavilion, while in the left ones the boys suffered the same fate.
Who is a girl? Who is a boy? Who decides what to wear, love, feel?
No one could cross the fence that parted the courtyard, despite it adjoined the two wings.
No one could have been different from him- or herself, nor could one imagine having a different appearance. And the same went for all the schools in the world.
Thus girls and boys did not even know how their friends actually looked like. Those with braids, bows and ponytails, looking at their reflections on the glasses frozen by the continental wind, could not hear the noise of the boys’ screams, nor could they see their pigtails and grazed knees. Same was true for the nails blackened by the dust and the outdoor games, and the hands covered with dust by doing cartwheels, which remained unknown to each other. No one knew it, but the eyes wide open in the dark were the same everywhere.
Furry only crossed the gate that divides the wings of the palace.
How could the daughter of a mum and a bear be part of the school of rules? She must either be expelled, or integrate and become a girl. Or, she must runaway, get free, become a bear.
The medallions of the school’s directors scrutinised her from on high with their severe looks, while she was doing it for the first time. Her heart was squeezing. She feared to be cut while walking. She feared to be mutilated. You are hairy you are odd you are wrong you are outside the rules you are improper you are monstrous you are not a boy you are not a girl you are an angel you are an animal.
Centuries go by, but Furry finds her courage every night. While everybody is sleeping, she steps out of her bed, barefoot; first she runs silently, then she runs like a madman to go spying the other wing. And she takes what she likes. Day by day, night after night, year after year she learns to sleep in a different pavilion; she learns to feel the scents, the voices, and to dress their costumes. She feels her beard growing and dresses her hair with braids. She has long eyelashes and an animal breath. She has the grace, the unnatural grace of the city, she has the warmongering force of nature; she has everything she needs. Generations keep on running separated in the school’s strict apparatus, but Furry, at night, will eternally start again her excursions and experimentations, free.
Furry paints her self-portrait and frames it with pride. In the long hallways illuminated by the wan light of the morning, it appears now, after the aristocratic sequence of portraits of the Masters of Rules and Life, the one hung by Furry. The frame is coloured like her teddy bear’s hair, the canvas is made with silk and crochet, the portrait shows an impertinent girl who overcame non-acceptance and who taught how to return the insinuations about her flaw with an exclamation of difference. 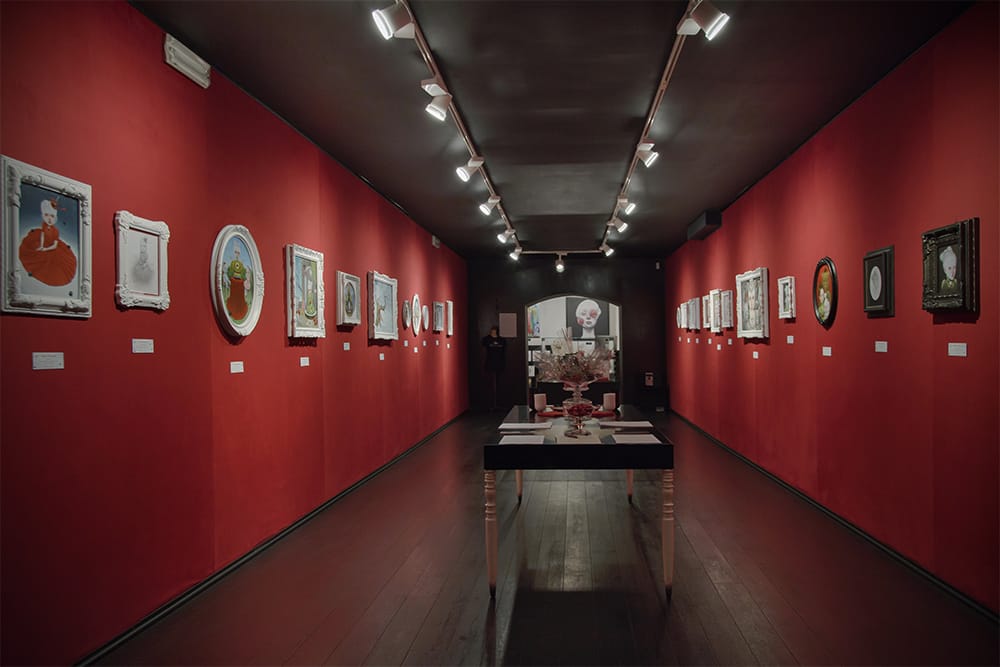 » Pictures from the opening

Need Help? Chat with us
Start a Conversation
Hi! Click one of our member below to chat on Whatsapp
The team typically replies in a few minutes.
Sales Support
Collect now
We use cookies to ensure that we give you the best experience on our website. If you continue to use this site we will assume that you are happy with it.Ok